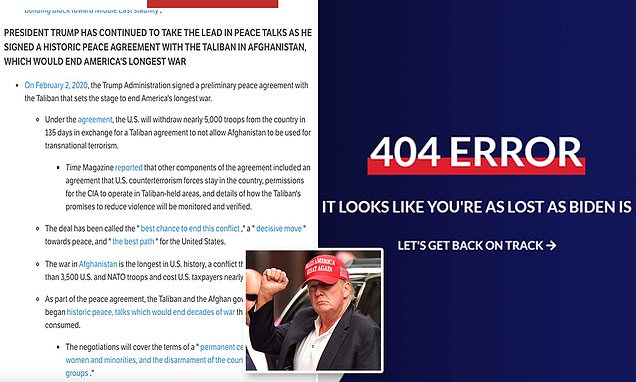 The page, taken down around the same time Trump called on Biden to resign on Sunday night, was titled ‘President Trump Is Bringing Peace In The Middle East’.

The Republican National Committee webpage highlighting Donald Trump‘s support for withdrawing troops from Afghanistan and his ‘historic peace agreement with the Taliban’ has disappeared.

The page was titled ‘President Trump Is Bringing Peace In The Middle East’ and described how he ‘continued to take the lead in peace talks’.

It also claimed ‘while President Trump has championed peace, Joe Biden has taken the lead in pushing for endless wars’ and how the former president had ‘taken action to defeat and eliminate dangerous leaders.’

When users tried to visit the page on Sunday night, they were met with an error message and an image of the current president saying ‘it looks like you’re as lost as Biden is’.

A source however told DailyMail.com that the RNC site recently underwent maintenance and there are no pages older than January 1, 2021.

Trump made a conditional peace deal with the Taliban in 2020 to reduce the number of Afghan troops if the Taliban did not provide support to terrorists.

He also said he wanted a complete withdrawal by May 1 of this year. Biden extended the deadline to September 11 and then pledged to have all US troops out by August 31. 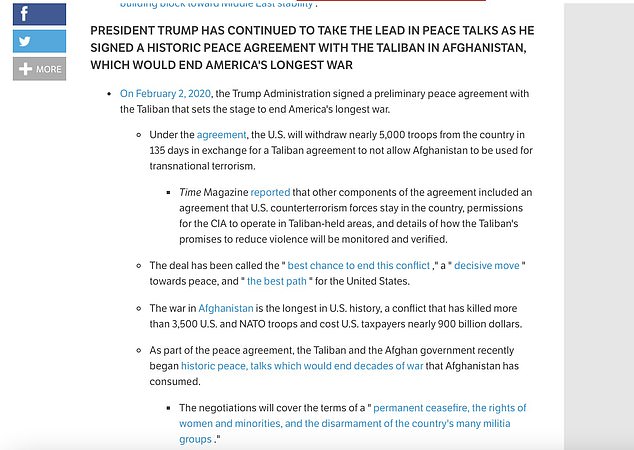 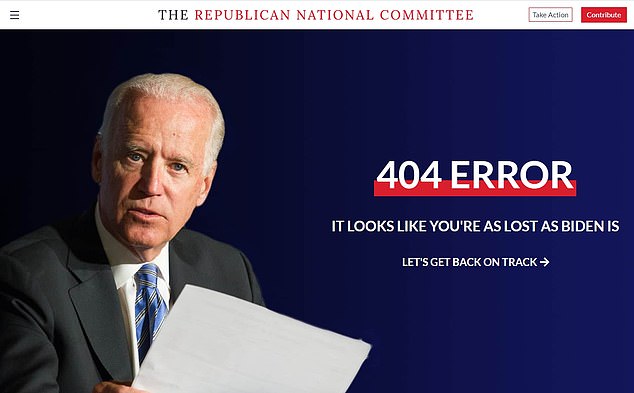 Biden has criticized Trump’s agreement with the Taliban and said it gave him little option but to withdraw troops.

On Sunday night, Trump sent a statement to his followers calling on Biden to ‘resign in disgrace’ on Sunday amid the Taliban’s takeover of Afghanistan after the withdrawal of US troops.

‘It is time for Joe Biden to resign in disgrace for what he has allowed to happen to Afghanistan, along with the tremendous surge in COVID, the Border catastrophe, the destruction of energy independence, and our crippled economy,’ Trump said in an email.

He continued perpetuating his claim that Biden won the presidency via election fraud, concluding the email: ‘It shouldn’t be a big deal, because he wasn’t elected legitimately in the first place.’