WASHINGTON — An internal investigation by the C.I.A. has found that its officers penetrated a computer network used by the Senate Intelligence Committee in preparing its damning report on the C.I.A.’s detention and interrogation program.

The report by the agency’s inspector general also found that C.I.A. officers read the emails of the Senate investigators and sent a criminal referral to the Justice Department based on false information, according to a summary of findings made public on Thursday. One official with knowledge of the report’s conclusions said the investigation also discovered that the officers created a false online identity to gain access on more than one occasion to computers used by the committee staff.

The inspector general’s account of how the C.I.A. secretly monitored a congressional committee charged with supervising its activities touched off angry criticism from members of the Senate and amounted to vindication for Senator Dianne Feinstein of California, the committee’s Democratic chairwoman, who excoriated the C.I.A. in March when the agency’s monitoring of committee investigators became public.

A statement issued Thursday morning by a C.I.A. spokesman said that John O. Brennan, the agency’s director, had apologized to Ms. Feinstein and the committee’s ranking Republican, Senator Saxby Chambliss of Georgia, and would set up an internal accountability board to review the issue. The statement said that the board, which will be led by a former Democratic senator, Evan Bayh of Indiana, could recommend “potential disciplinary measures” and “steps to address systemic issues.”

But anger among lawmakers grew throughout the day. Leaving a nearly three-hour briefing about the report in a Senate conference room, members of both parties called for the C.I.A. officers to be held accountable, and some said they had lost confidence in Mr. Brennan’s leadership. “This is a serious situation and there are serious violations,” said Mr. Chambliss, generally a staunch ally of the intelligence community. He called for the C.I.A. employees to be “dealt with very harshly.”

Senator Mark Udall, Democrat of Colorado and another member of the Intelligence Committee, demanded Mr. Brennan’s resignation. “The C.I.A. unconstitutionally spied on Congress by hacking into the Senate Intelligence Committee computers,” he said in a written statement. “This grave misconduct not only is illegal but it violates the U.S. Constitution’s requirement of separation of powers.

“These offenses, along with other errors in judgment by some at the C.I.A., demonstrate a tremendous failure of leadership, and there must be consequences,” he added.

Committee Democrats have spent more than five years working on a report about the C.I.A.’s detention and interrogation program during the Bush administration, which employed brutal interrogation methods like waterboarding. Parts of that report, which concluded that the techniques yielded little valuable information and that C.I.A. officials consistently misled the White House and Congress about the efficacy of the techniques, are expected to be made public some time this month. Committee Republicans withdrew from the investigation, saying that it was a partisan smear and without credibility because it was based solely on documents and that there were no plans to interview C.I.A. officers who ran the program.

According to David B. Buckley, the C.I.A. inspector general, three of the agency’s information technology officers and two of its lawyers “improperly accessed or caused access” to a computer network designated for members of the committee’s staff working on the report to sift through millions of documents at a C.I.A. site in Northern Virginia. The names of those involved are unavailable because the full report has not yet been made public.

The C.I.A. officials penetrated the computer network when they came to suspect that the committee’s staff had gained unauthorized access to an internal C.I.A. review of the detention program that the spy agency never intended to give to Congress. A C.I.A. lawyer then referred the agency’s suspicions to the Justice Department to determine whether the committee staff broke the law when it obtained that document. The inspector general report said that there was no “factual basis” for this referral, which the Justice Department has declined to investigate, because the lawyer had been provided inaccurate information. The report said that the three information technology officers “demonstrated a lack of candor about their activities” during interviews with the inspector general. 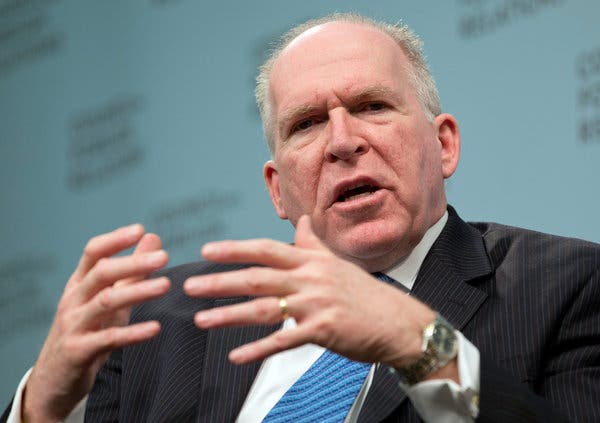 The dispute brought relations between the spy agency and lawmakers to a new low, as the two sides traded a host of accusations — from computer hacking to violating constitutional principles of separation of powers.

At a tense meeting earlier this week in which Ms. Feinstein and Mr. Chambliss were briefed by Mr. Brennan on the report, Ms. Feinstein confronted Mr. Brennan over his past public statements on the issue, in which he defended the agency’s actions, and his implicit criticism of her.

When the C.I.A.’s monitoring of the committee became public in March, after months of private meetings and growing bitterness, Ms. Feinstein took to the Senate floor to deliver a blistering speech accusing the agency of infringing on the committee’s role as overseer.

Calling it a “defining moment” in the committee’s history, Ms. Feinstein said that how the matter was resolved “will show whether the Intelligence Committee can be effective in monitoring and investigating our nation’s intelligence activities, or whether our work can be thwarted by those we oversee.”

Hours later, Mr. Brennan was publicly questioned about the dispute and said that “when the facts come out on this, I think a lot of people who are claiming that there has been this tremendous sort of spying and monitoring and hacking will be proved wrong.”

Mr. Brennan said at the time that he had referred the matter to the agency’s inspector general “to make sure that he was able to look honestly and objectively at what the C.I.A. did.”

The White House publicly defended Mr. Brennan on Thursday, saying he had taken “responsible steps” to address the behavior of C.I.A. employees, which he said included suggesting an investigation, accepting its results and appointing an accountability board.

Asked whether the results of the investigation presented a credibility issue for Mr. Brennan, Josh Earnest, the White House press secretary, said, “Not at all.”

Crediting Mr. Brennan with playing an “instrumental role” in helping the United States government destroy Al Qaeda’s leadership in Afghanistan and Pakistan, Mr. Earnest said, “He is somebody who has a very difficult job, who does that job extraordinarily well.”

Ms. Feinstein called Mr. Brennan’s apology and decision to set up an accountability board “positive first steps,” and said the inspector general report “corrects the record.” A separate investigation, led by the Senate’s sergeant-at-arms, has yet to be completed.

But others took a much harder line. Senator Harry Reid of Nevada, the majority leader, called the C.I.A.’s actions “appalling.” Senator Angus King of Maine, an independent, said that the spy agency’s actions violated both the spirit and the letter of the constitutional separation of powers.

As he put it: “How do we do our oversight if we can’t believe what is being represented to us in our committee?”