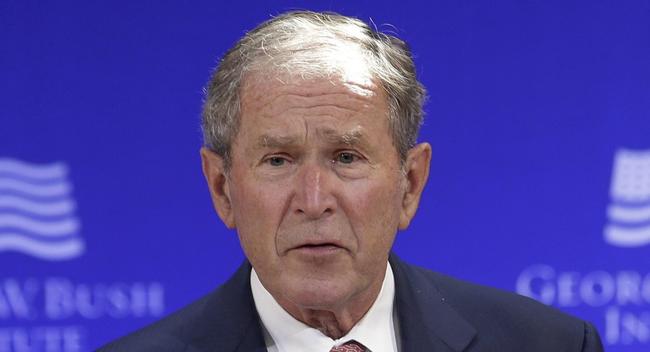 Authored by Caitlin Johnstone via Medium.com,

Humanity was treated to an important lecture on peace at a recent event for the NIR School of the Heart by none other than Ellen Degeneres BFF and world-renowned peace expert George W Bush.

“I don’t think the Iranians believe a peaceful Middle East is in their national interest,” said the former president according to The Washington Post’s Josh Rogin, whose brief Twitter thread on the subject appears to be the only record of Bush’s speech anywhere online.

“An isolationist United States is destabilizing around the world,” Bush said during the speech in what according to Rogin was a shot at the sitting president.

“We are becoming isolationist and that’s dangerous for the sake of peace.”

For those who don’t speak fluent neoconservative, “isolationist” here means taking even one small step in any direction other than continued military expansionism into every square inch of planet Earth, and “We are becoming isolationist” here means “We have hundreds of military bases circling the globe, our annual military budget is steadily climbing toward the trillion-dollar mark, and we are engaged in countless undeclared wars and regime change interventions all around the world.”

It is unclear why Bush is choosing to present himself as a more peaceful president than Trump given that by this point in his first term Bush had launched not one but two full-scale ground invasion wars whose effects continue to ravage the Middle East to this very day, especially given the way both presidents appear to be in furious agreement on foreign policy matters like Iran. But here we are.

From a certain point of view it’s hard to say which is stranger:

(A) a war criminal with a blood-soaked legacy of mass murder, torture and military expansionism telling Trump that he is endangering peace with his “isolationism”, or

(B) the claim that Trump is “isolationist” at all.

As we’ve discussed previously, Trump’s so-called isolationism has thus far consisted of killing tens of thousands of Venezuelans with starvation sanctions in an attempt to effect regime change in the most oil-rich nation on earth, advancing a regime change operation in Iran via starvation sanctions, CIA covert ops, and reckless military escalations, continuing to facilitate the Saudi-led slaughter in Yemen and to sell arms to Saudi Arabia, inflating the already insanely bloated US military budget to enable more worldwide military expansionism, greatly increasing the number of bombs dropped per day from the previous administration, killing record numbers of civilians in airstrikes for which he has reduced military accountability, and of course advancing many, many new cold war escalations against the nuclear superpower Russia.

But these bogus warnings about a dangerous, nonexistent threat of isolationism are nothing new for Dubya. In his farewell address to the nation, Bush said the following:

“In the face of threats from abroad, it can be tempting to seek comfort by turning inward. But we must reject isolationism and its companion, protectionism. Retreating behind our borders would only invite danger. In the 21st century, security and prosperity at home depend on the expansion of liberty abroad. If America does not lead the cause of freedom, that cause will not be led.”

As we discussed recently, use of the pro-war buzzword “isolationism” has been re-emerging from its post-Bush hibernation as a popular one-word debunk of any opposition to continued US military expansionism in all directions, and it is deceitful in at least three distinct ways. Firstly, the way it is used consistently conflates isolationism with non-interventionism, which are two wildly different things. Secondly, none of the mainstream political figures who are consistently tarred with the “isolationist” pejorative are isolationists by any stretch of the imagination, or even proper non-interventionists; they all support many interventionist positions which actual non-interventionists object to. Thirdly, calling someone who opposes endless warmongering an “isolationist” makes as much sense as calling someone who opposes rape a man-hating prude; opposing an intrinsically evil act is not the same as withdrawing from the world.

Nobody actually believes that US foreign policy is under any threat of anything remotely resembling isolationism. The real purpose of this buzzword is to normalize the forever war and drag the Overton window so far in the direction of ghoulish hawkishness that the opposite of “war” is no longer “peace”, but “isolationism”. By pulling this neat little trick, the propagandists of the political/media class have successfully made endless war seem like a perfectly normal thing to be happening and any small attempt to scale it back look weird and freakish, when the truth is the exact opposite. War is weird, freakish and horrific, and peace is of course normal. This is the only healthy way to see things.

It would actually be great if George W Bush could shut the fuck up forever, ideally in a locked cell following a public war tribunal. Failing that, at the very least people should stop looking at him as a cuddly wuddly teddy bear with whom it’s fun to share a sporting arena suite or a piece of hard candy or to hang award medals on for his treatment of veterans. This mass murdering monster has been growing more and more popular with Democrats lately just because he offers mild criticisms of Trump sometimes, as have war pigs like Bill Kristol and Max Boot and even John Bolton for the same reason, and it needs to stop. And in the name of a million dead Iraqis, please don’t start consulting this man on matters of peace.

Thanks for reading! The best way to get around the internet censors and make sure you see the stuff I publish is to subscribe to the mailing list for my website, which will get you an email notification for everything I publish. My work is entirely reader-supported, so if you enjoyed this piece please consider sharing it around, liking me on Facebook, following my antics on Twitter, checking out my podcast on either Youtube, soundcloud, Apple podcasts or Spotify, following me on Steemit, throwing some money into my hat on Patreon or Paypal, purchasing some of my sweet merchandise, buying my new book Rogue Nation: Psychonautical Adventures With Caitlin Johnstone, or my previous book Woke: A Field Guide for Utopia Preppers. For more info on who I am, where I stand, and what I’m trying to do with this platform, click here. Everyone, racist platforms excluded, has my permission to republish or use any part of this work (or anything else I’ve written) in any way they like free of charge.